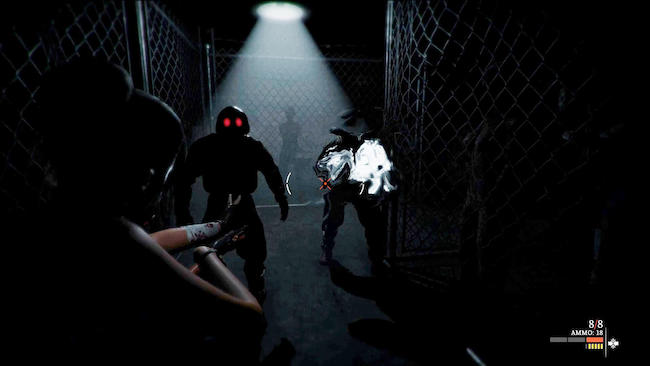 Airtight City is a third person survival horror adventure that plays like a blend of Resident Evil and Dead Space, as you attempt to escape from a prison that’s overrun with zombie-like monsters whose limbs you have to blast off to kill them.

Drawing inspiration from classic survival horror games like Resident Evil and Dead Space, Airtight City puts you in the role of a young woman who wakes up alone in a prison facility, with only a mysterious voice on a portable radio to give her some guidance. Worse still, it seems that the prison is full of dead bodies and zombie-like monsters with regenerative powers. The monsters are fast and deadly, but you soon find out the best way to dispatch them is by blasting off their limbs, making them weaker and more susceptible to damage. It’s still not going to be easy to escape the prison though…

The gameplay in Airtight City is fondly reminiscent of Resident Evil, with you scavenging for resources, solving simple puzzles and dispatching grotesque monsters that will very quickly kill you if you allow them to get close. It’s still early in development so does have a few rough edges, chief of which is the insanely bad checkpointing system (where a death can set you back by up to 15 minutes worth of gameplay). It is a very promising game though, particularly if you’re a fan of classic survival horror. If they fix the checkpointing system then it could be a lot of fun.