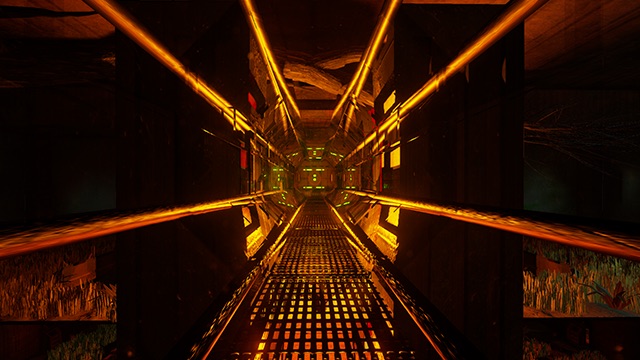 ARC is a creepy Unreal Engine 4 powered first person horror/shooter set on a derelict spaceship controlled by a malfunctioning (and rather untrustworthy) HAL-Style AI.

All is not right on this ship – the crew are all missing, there are some nasty creatures lurking in the corridors and you’re getting dangerously close to a black hole. It’s your job to get the ship to safety, with the aid of a malfunctioning AI which doesn’t seem to care too much about your safety, infact if you die it’ll just thaw aout another crewmate from hypersleep and tell you to get on with it.  The voiceover for this AI is a notable highlight of ARC, with seemingly inconspicuous statements being make to sound remarkably sinister thanks to the malfunctions in the AI’s speech banks.

The cargo of ARC has broken out of it’s containment and nature has overtaken the ship, leading to some pretty dangerous creatures roaming around, and some vast areas of greenery.  The eerie beauty of all this greenery has quite an impact, as it’s really not something you’d expect to see on a spacecraft.

The first half of ARC is an exceptionally tense survival horror with hints of Bioshock and 2001: A Space Odyssey, then things kick up a gear for an action packed finale, full of gravity flipping chaos.   Weighing in with a playthrough of around 15 minutes, ARC is a short, sharp blast of intense action and horror, full of spectacle and dark humor. Superb Sci-Fi horror with a pitch black heart.