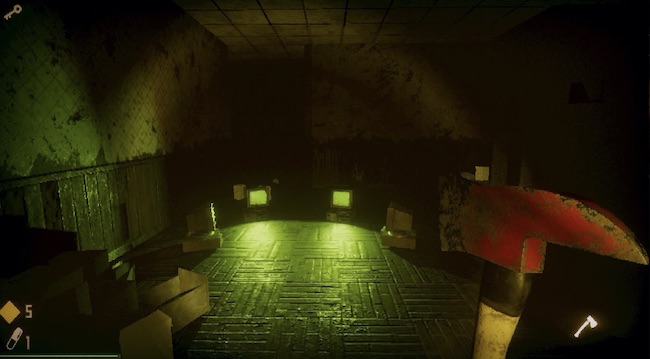 Golden Light is a very freaky first person roguelike survival horror game where everyday objects like computers and vending machines can spring to life and brutally murder you!

Currently in development by the talented Da Neel (creator of A Box Full of Joy, Boneborne: Prologue and Unrottenskulls). Golden Light is a tense and terrifying first person horror game where grotesque abominations can jump out from anywhere as you make your way down the floors of an abandoned procedurally generated office block. The visuals and atmosphere draw inspiration from classic horror games, but it also has a very unique parkour-like control style that allows you to get around the levels quickly and fluidly vault over any obstacles in your way.

In each level of Golden Light your goal is to search for keys and use them to unlock the elevator to the next floor. Each floor is procedurally generated and can contain a variety of different weapons, ammo, gold and items to pick up. Those weapons will come in handy too pretty much any everyday object (such as a bookshelf, a pot plant or a stack of books) can spring to life as you pass nearby and start mauling you to death. It can take quite a few shots to dispatch them too, so often running away is as good an option as standing and fighting. The deeper you descend through the office block, the more powerful weapons you’ll find, but there will also be a larger variety of monsters to deal with.

You’ll die often while exploring the monster-filled offices of Golden Light, but you keep coming back for more as, even in these early stages of development, it’s a very well crafted horror game. The fact that any nearby object can burst into life and start attacking you is terrifying, but it’s the fluid way your character moves around the game world that’s perhaps most impressive. It’s a real joy running and vaulting around the abandoned office space (until you’re murdered by a mutant vending machine anyway!). Highly recommended.