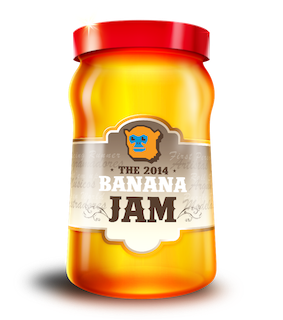 Banana Jam is a fun new game jam from Nerd Monkeys in partnership with IPCA, in which, any member of public can submit a game idea no longer than 140 characters long (for tweeting purposes), with the best game idea being made into a full game by a group of young developers.

All game ideas submitted will be voted on in the Banana Jam poll, and the dev team composed of young developers will choose one game pitch from the most voted main genre.

The chosen game pitch will then go into production to create a prototype and, if any good, it will pass into alpha production, otherwise another pitch will be selected.

If your submission reaches the final alpha version stage, your game will have a strong probability to go into full production and be published by Nerd Monkeys.  This means you’ll earn a royalty percentage of its sales!