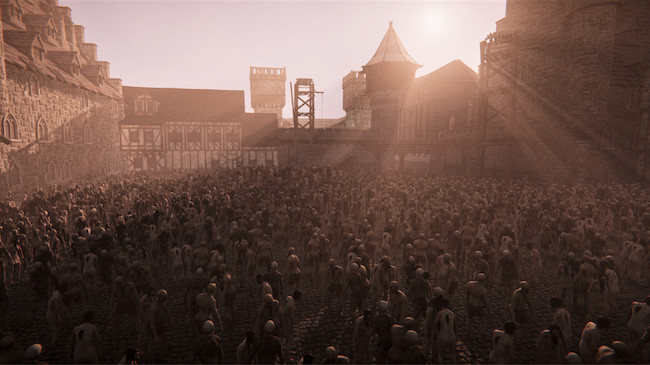 The Black Masses is an open world fantasy horror RPG adventure where you explore a vast 16 square kilometer island that’s populated by hundreds of thousands of possessed zombie-like inhabitants.

Playable in single-player or online co-op (though only single-player is available in the current build), The Black Masses starts with your character washing up on a mysterious island after a shipwreck. It seems that the island has been corrupted by a mysterious black substance which has infected the inhabitants and turned them all into mindless zombie-like monsters.

The current demo build of The Black Masses gives you a sizeable chunk of the island to explore and plenty of content to play through. It feels a lot like a Bethesda style open world RPG, with you able to explore freely, scavenge resources, level up, learn new abilities, chat to NPCs and take on quests and side-quests.

There are lots of different weapons to try out, most of which are melee based and can dispatch one or two of the infected quite easily (with some excellent limb dismemberment effects thrown in). However, the game is called “The Black Masses” for a very good reason – thanks to the game’s next generation of crowd rendering technology, you’ll sometimes come across massive groups of hundreds (possibly thousands) of the infected who will charge at you en-masse. It’s quite a sight to behold, but when this happens, you’d better start running!

There’s some UI that could do with being cleaned up and some areas could be more fleshed out but on the whole The Black Masses is shaping up to be an excellent open world horror RPG adventure. You have lots of freedom to explore, there’s plenty to discover on the island, the limb slicing combat is very enjoyable and being chased by giant hordes of infected is quite an experience. A zombie-filled island adventure well worth embarking on.