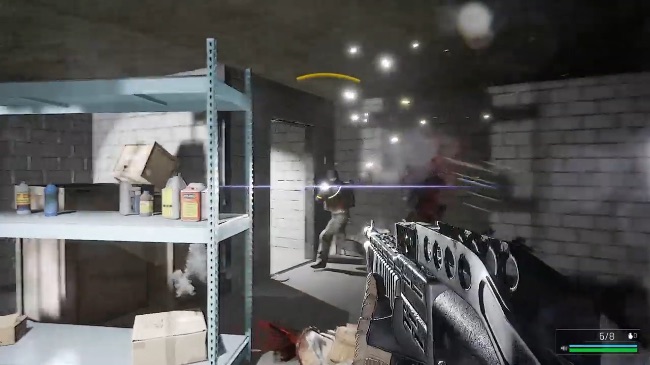 Trepang2 is a F.E.A.R. inspired first person shooter where you use slow-motion, invisibility and gun-fu skills to blast your way out of a heavily guarded blacksite.

First thing’s first, “Trepang2” is a bit of a weird name for two reasons – there was never a Trepang1 and “Trepang” is a type of large sea cucumber. Thankfully Trepang2 is just a placeholder name though and once you load up the game, the name will be the last thing on your mind as you turn a small arming into a mass of quivering bloody chunks.

In Trepang2 you take on the role of an enhanced human who awakens with no memory and locked in a heavily guarded military blacksite. A mysterious group helps you break out of your cell and you then use your enhanced skills to eviscerate everyone standing between you and the exit, then uncover the conspiracy and save the world.

The Trepang2 demo build features two large missions and takes around an hour to play through (be sure to stick around after the first game over screen to start the second mission). You can use stealth to sneak past a lot of the guards, but the real fun comes when you charge head-first into combat.

To take out your enemies you can use a selection of powerful guns (including a wonderfully OTT shotgun), grenades, environmental objects, melee attacks, invisibility and slow motion. The combat feels fantastic and the on-screen carnage is incredible, with plenty of environmental destruction and dismemberment (a well placed shotgun blast can rip a man to shreds). The enemy AI is excellent too – moving and reacting like real humans and honing in on your last seen location rather than just charging at you like you have a homing beacon attached to you.

Even in these early stages of development the core gameplay is an absolute blast to play. It’s fast, fluid and extremely brutal, making you feel like a supersoldier as you rip your enemies to shreds. Trepang2 is shaping up to be a ton of fun. Highly recommended.

Check Out a gameplay Video Here