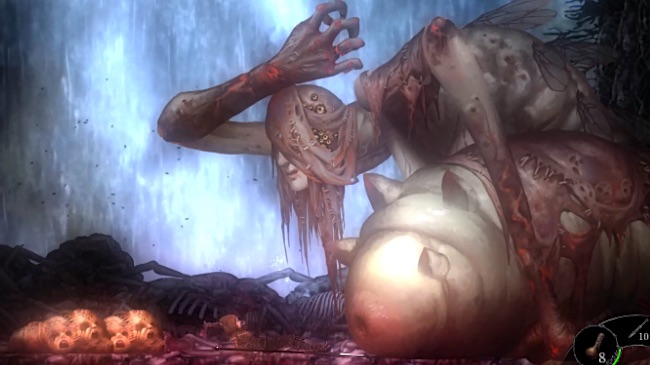 Vigil: The Longest Night is a beautifully animated Eldrich horror metrodvania adventure where you attempt to save your hometown from a creeping evil that’s infesting the surrounding countryside.

Drawing inspiration from Castlevania and Salt and Sanctuary, Vigil: The Longest Night is a 2D action platforming metroidvania adventure set in a world that’s infested with Eldrich horrors. You take on the role of Leila, the last member of The Vigil and the last hope of a land that’s enshrouded in a perpetual darkness.

The combat in Vigil: The Longest Night is quite Soulsian, with you using attacks, dodges and blocks, while managing your stamina bar. You can switch between three main weapons at the touch of a button and you have an assortment of throwable weapons too. There’s lots of different equippable gear and weapons to discover, and you can select a new skill for your character to learn each time you level up.

The Beta build of Vigil: The Longest Night takes around an hour to play through and features a large chunk of the game world and two big bosses to fight. Gameplay-wise there are a couple rough edges, such as the significant delay before you throw throwable weapons and bats that seem to disappear behind the background, but on the whole it’s great fun and packs a serious challenge if you play in hard mode.

The artwork in Vigil: The Longest Night is fantastic, with you battling grotesque looking beasts across beautiful fantasy backdrops. It’s a strange and alluring world that you immediately want to know more about, but that’s where you run into a problem – all the text is extremely long winded and badly translated (which makes it very hard to follow). That’s fairly easy for the devs to fix though and the core gameplay and visuals are already superb. A beautiful dark fantasy metroidvania well worth delving into.

Check Out Vigil: The Longest Night On Steam Here

To join in the Vigil: The Longest Night open Beta just join the official Discord channel and type “!getkey” in the #Steam-Key-Claim channel. You’ll then be DM’d by a bot with your key. The Beta will be ongoing until Tuesday the 18th of Feb so grab a key quick! Anyone who gives useful feedback will get their names in the credits!